Baryon acoustic oscillations in the Lyα forest of BOSS quasars

We report a detection of the baryon acoustic oscillation (BAO) feature in the three-dimensional correlation function of the transmitted flux fraction in the Lyα forest of high-redshift quasars. The study uses 48 640 quasars in the redshift range 2.1 ≤ z ≤ 3.5 from the Baryon Oscillation Spectroscopic Survey (BOSS) of the third generation of the Sloan Digital Sky Survey (SDSS-III). At a mean redshift z = 2.3, we measure the monopole and quadrupole components of the correlation function for separations in the range 20 h-1 Mpc < r < 200 h-1 Mpc. A peak in the correlation function is seen at a separation equal to (1.01 ± 0.03) times the distance expected for the BAO peak within a concordance ΛCDM cosmology. This first detection of the BAO peak at high redshift, when the universe was strongly matter dominated, results in constraints on the angular diameter distance DA and the expansion rate H at z = 2.3 that, combined with priors on H0 and the baryon density, require the existence of dark energy. Combined with constraints derived from cosmic microwave background observations, this result implies H(z = 2.3) = (224 ± 8) km s-1 Mpc-1, indicating that the time derivative of the cosmological scale parameter ȧ = H(z = 2.3)/(1 + z) is significantly greater than that measured with BAO at z ~ 0.5. This demonstrates that the expansion was decelerating in the range 0.7 < z < 2.3, as expected from the matter domination during this epoch. Combined with measurements of H0, one sees the pattern of deceleration followed by acceleration characteristic of a dark-energy dominated universe. 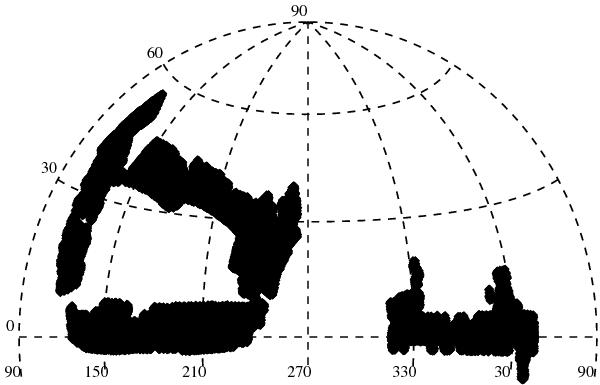