MOA 2010-BLG-477Lb: Constraining the Mass of a Microlensing Planet from Microlensing Parallax, Orbital Motion, and Detection of Blended Light

Microlensing detections of cool planets are important for the construction of an unbiased sample to estimate the frequency of planets beyond the snow line, which is where giant planets are thought to form according to the core accretion theory of planet formation. In this paper, we report the discovery of a giant planet detected from the analysis of the light curve of a high-magnification microlensing event MOA 2010-BLG-477. The measured planet-star mass ratio is q = (2.181 ± 0.004) × 10-3 and the projected separation is s = 1.1228 ± 0.0006 in units of the Einstein radius. The angular Einstein radius is unusually large θE = 1.38 ± 0.11 mas. Combining this measurement with constraints on the "microlens parallax" and the lens flux, we can only limit the host mass to the range 0.13 < M/M ⊙ < 1.0. In this particular case, the strong degeneracy between microlensing parallax and planet orbital motion prevents us from measuring more accurate host and planet masses. However, we find that adding Bayesian priors from two effects (Galactic model and Keplerian orbit) each independently favors the upper end of this mass range, yielding star and planet masses of M * = 0.67+0.33 - 0.13 M ⊙ and mp = 1.5+0.8 - 0.3 M JUP at a distance of D = 2.3 ± 0.6 kpc, and with a semi-major axis of a = 2+3 - 1 AU. Finally, we show that the lens mass can be determined from future high-resolution near-IR adaptive optics observations independently from two effects, photometric and astrometric. 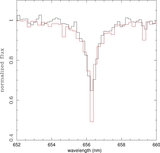