It has been shown before that the high mass-to-light ratios of ultracompact dwarf galaxies (UCDs) can be explained if their stellar initial mass function (IMF) was top-heavy, i.e., that the IMF was skewed toward high-mass stars. In this case, neutron stars (NSs) and black holes would provide unseen mass in the UCDs. In order to test this scenario with an independent method, we use data on which a fraction of UCDs has a bright X-ray source. These X-ray sources are interpreted as low-mass X-ray binaries (LMXBs), i.e., binaries where a NS accretes matter from an evolving low-mass star. We find that LMXBs are indeed up to 10 times more frequent in UCDs than expected if the IMF was invariant. The top-heavy IMF required to account for this overabundance is the same as that needed to explain the unusually high mass-to-light ratios of UCDs and a top-heavy IMF appears to be the only simultaneous explanation for both findings. Furthermore, we show that the high rate of type II supernovae in the starburst galaxy Arp 220 suggests a top-heavy IMF in that system. This finding is consistent with the notion that starburst galaxies are sites where UCDs are likely to be formed and that the IMF of UCDs is top-heavy. It is estimated that the IMF becomes top-heavy whenever the star formation rate per volume surpasses 0.1 M ⊙ yr-1 pc-3 in pc-scale regions. 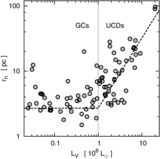