We present the Data Release 9 Quasar (DR9Q) catalog from the Baryon Oscillation Spectroscopic Survey (BOSS) of the Sloan Digital Sky Survey III. The catalog includes all BOSS objects that were targeted as quasar candidates during the survey, are spectrocopically confirmed as quasars via visual inspection, have luminosities Mi[z = 2] < -20.5 (in a ΛCDM cosmology with H0 = 70 km s-1 Mpc-1, ΩM = 0.3, and ΩΛ = 0.7) and either display at least one emission line with full width at half maximum (FWHM) larger than 500 km s-1 or, if not, have interesting/complex absorption features. It includes as well, known quasars (mostly from SDSS-I and II) that were reobserved by BOSS. This catalog contains 87 822 quasars (78 086 are new discoveries) detected over 3275 deg2 with robust identification and redshift measured by a combination of principal component eigenspectra newly derived from a training set of 8632 spectra from SDSS-DR7. The number of quasars with z > 2.15 (61 931) is ~2.8 times larger than the number of z > 2.15 quasars previously known. Redshifts and FWHMs are provided for the strongest emission lines (C iv, C iii], Mg ii). The catalog identifies 7533 broad absorption line quasars and gives their characteristics. For each object the catalog presents five-band (u, g, r, i, z) CCD-based photometry with typical accuracy of 0.03 mag, and information on the morphology and selection method. The catalog also contains X-ray, ultraviolet, near-infrared, and radio emission properties of the quasars, when available, from other large-area surveys. The calibrated digital spectra cover the wavelength region 3600-10 500 Å at a spectral resolution in the range 1300 < R < 2500; the spectra can be retrieved from the SDSS Catalog Archive Server. We also provide a supplemental list of an additional 949 quasars that have been identified, among galaxy targets of the BOSS or among quasar targets after DR9 was frozen. 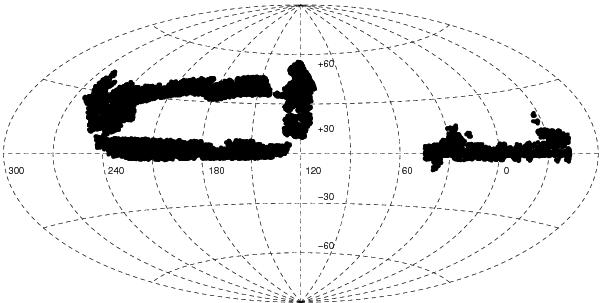