Context. Caustic crossing is the clearest signature of binary lenses in microlensing. In the present context, this signature is diluted by the large source star but a detailed analysis has allowed the companion signal to be extracted.
Aims: MOA 2009-BLG-411 was detected on August 5, 2009 by the MOA-Collaboration. Alerted as a high-magnification event, it was sensitive to planets. Suspected anomalies in the light curve were not confirmed by a real-time model, but further analysis revealed small deviations from a single lens extended source fit.
Methods: Thanks to observations by all the collaborations, this event was well monitored. We first decided to characterize the source star properties by using a more refined method than the classical one: we measure the interstellar absorption along the line of sight in five different passbands (VIJHK). Secondly, we model the lightcurve by using the standard technique: make (s,q,α) grids to look for local minima and refine the results by using a downhill method (Markov chain Monte Carlo). Finally, we use a Galactic model to estimate the physical properties of the lens components.
Results: We find that the source star is a giant G star with radius 9 R⊙. The grid search gives two local minima, which correspond to the theoretical degeneracy s ≡ s-1. We find that the lens is composed of a brown dwarf secondary of mass MS = 0.05 M⊙ orbiting a primary M-star of mass MP = 0.18 M⊙. We also reveal a new mass-ratio degeneracy for the central caustics of close binaries.
Conclusions: As far as we are aware, this is the first detection using the microlensing technique of a binary system in our Galaxy composed of an M-star and a brown dwarf.

Appendix is available in electronic form at http://www.aanda.org 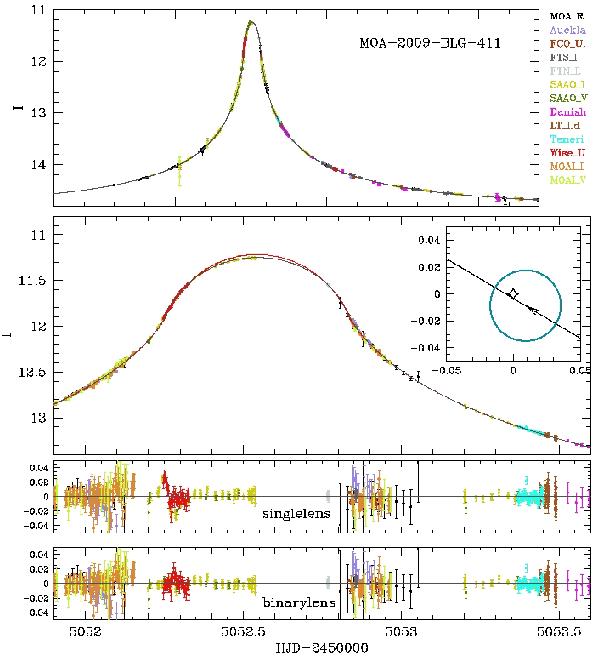