Rapid-response mode VLT/UVES spectroscopy of super iron-rich gas exposed to GRB 080310. Evidence of ionization in action and episodic star formation in the host

We analyse high-resolution near-UV and optical spectra of the afterglow of GRB 080310, obtained with the Very Large Telescope Ultraviolet and Visual Echelle Spectrograph (VLT/UVES), to investigate the circumburst environment and the interstellar medium of the gamma-ray burst (GRB) host galaxy. The VLT rapid-response mode (RRM) enabled the observations to start only 13 min after the Swift trigger and a series of four exposures to be collected before dawn. A low neutral-hydrogen column-density (log N(H i) = 18.7) is measured at the host-galaxy redshift of z = 2.42743. At this redshift, we also detect a large number of resonance ground-state absorption lines (e.g., C ii, Mg ii, Al ii, Si ii, Cr ii, C iv, Si iv), as well as time-varying absorption from the fine-structure levels of Fe ii. Time-varying absorption from a highly excited Fe iii energy level (7S3), giving rise to the so-called UV 34 line triplet, is also detected, for the first time in a GRB afterglow. The Cr ii ground-state and all observed Fe ii energy levels are found to depopulate with time, whilst the Fe iii7S3 level is increasingly populated. This absorption-line variability is clear evidence of ionization by the GRB, which is for the first time conclusively observed in a GRB afterglow spectrum. We derive ionic column densities at each epoch of observations by fitting absorption lines with a four-component Voigt-profile model. We perform CLOUDY photo-ionization modelling of the expected pre-burst ionic column densities, to estimate that, before the onset of the burst, [C/H] = -1.3 ± 0.2, [O/H] < -0.8, [Si/H] = -1.2 ± 0.2, [Cr/H] = +0.7 ± 0.2, and [Fe/H] = +0.2 ± 0.2 for the integrated line profile, indicating strong overabundances of iron and chromium. For one of the components, we observe even more extreme ratios of [Si/Fe] ≤ -1.47 and [C/Fe] ≤ -1.74. These peculiar chemical abundances cannot easily be explained by current models of supernova yields. They are indicative of a low dust content, whilst dust destruction may also contribute to the marked Fe and Cr overabundances. The overall high iron enhancement along the line-of-sight suggests that there has been negligible recent star formation in the host galaxy. Thus, the occurrence of a GRB indicates that there has been episodes of massive star formation in the GRB region.

Based on Target-Of-Opportunity observations carried out in service mode using the Very Large Telescope Rapid-Response Mode under programme ID 080.D-0526, P.I. Vreeswijk, with the Ultraviolet and Visual Echelle Spectrograph (UVES) installed at the Nasmyth-B focus of the VLT, Unit 2, Kueyen, operated by the European Southern Observatory (ESO) on Cerro Paranal in Chile.Appendix A is available in electronic form at http://www.aanda.org 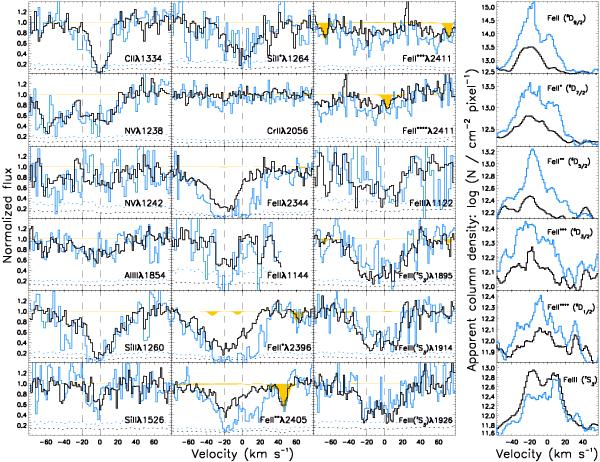