Context. The dynamics of solar system objects, such as dwarf planets and asteroids, has become a well-established field of celestial mechanics in the past thirty years, owing to the improvements that have been made in observational techniques and numerical studies. In general, the ecliptic is taken as the reference plane in these studies, although there is no dynamical reason for doing so. In contrast, the invariable plane as originally defined by Laplace, seems to be a far more natural choice. In this context, the latest study of this plane dates back to Burkhardt.
Aims: We define and determine the orientation of the invariable plane of the solar system with respect to both the ICRF and the equinox-ecliptic of J2000.0, and evaluate the accuracy of our determination.
Methods: Using the long-term numerical ephemerides DE405, DE406, and INPOP10a over their entire available time span, we computed the total angular momentum of the solar system, as well as the individual contribution to it made by each of the planets, the dwarf planets Pluto and Ceres, and the two asteroids Pallas and Vesta. We then deduced the orientation of the invariable plane from these ephemerides.
Results: We update the previous results on the determination of the orientation of the invariable plane with more accurate data, and a more complete analysis of the problem, taking into account the effect of the dwarf planet (1) Ceres as well as two of the biggest asteroids, (4) Vesta and (2) Pallas. We show that the inclusion of these last three bodies significantly improves the accuracy of determination of the invariable plane, whose orientation over a 100 y interval does not vary more than 0.1 mas in inclination, and 0.3 mas in longitude of the ascending node. Moreover, we determine the individual contributions of each body to the total angular momentum of the solar system, as well as the inclination and longitude of the node with respect to this latter plane.
Conclusions: Owing to the high accuracy of its determination and its fundamental dynamical meaning, the invariable plane provides a permanent natural reference plane that should be used when studying solar system dynamics, instead of the ecliptic. Since it is fixed in an isolated solar system, whereas the ecliptic alters with time, we recommend referring to it when working on long-term dynamics. 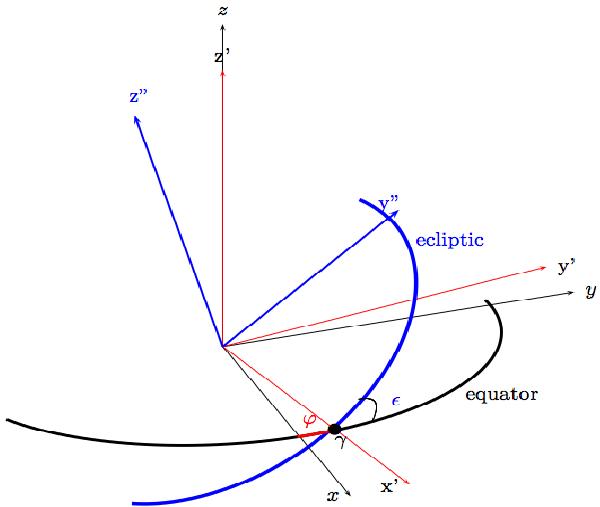