An atmospheric radiation model for Cerro Paranal. I. The optical spectral range


Aims: The Earth's atmosphere affects ground-based astronomical observations. Scattering, absorption, and radiation processes deteriorate the signal-to-noise ratio of the data received. For scheduling astronomical observations it is, therefore, important to accurately estimate the wavelength-dependent effect of the Earth's atmosphere on the observed flux.
Methods: In order to increase the accuracy of the exposure time calculator of the European Southern Observatory's (ESO) Very Large Telescope (VLT) at Cerro Paranal, an atmospheric model was developed as part of the Austrian ESO In-Kind contribution. It includes all relevant components, such as scattered moonlight, scattered starlight, zodiacal light, atmospheric thermal radiation and absorption, and non-thermal airglow emission. This paper focuses on atmospheric scattering processes that mostly affect the blue (<0.55 μm) wavelength regime, and airglow emission lines and continuum that dominate the red (>0.55 μm) wavelength regime. While the former is mainly investigated by means of radiative transfer models, the intensity and variability of the latter is studied with a sample of 1186 VLT FORS 1 spectra.
Results: For a set of parameters such as the object altitude angle, Moon-object angular distance, ecliptic latitude, bimonthly period, and solar radio flux, our model predicts atmospheric radiation and transmission at a requested resolution. A comparison of our model with the FORS 1 spectra and photometric data for the night-sky brightness from the literature, suggest a model accuracy of about 20%. This is a significant improvement with respect to existing predictive atmospheric models for astronomical exposure time calculators.

Based on observations made with ESO telescopes at Paranal Observatory. 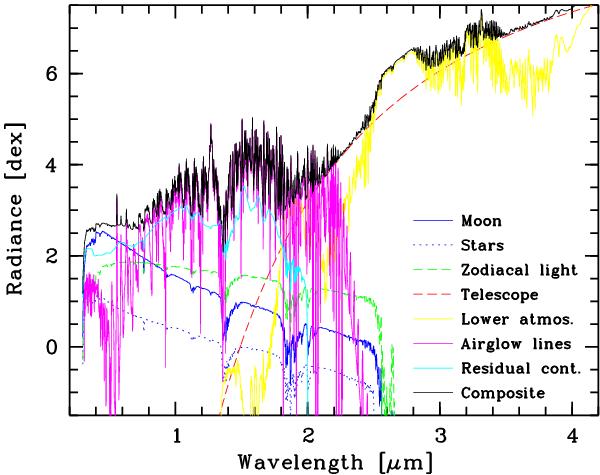