Formation of the planet around the millisecond pulsar J1719-1438

Context. Recently the discovery of , a 5.8 ms pulsar with a companion in a 2.2 h orbit, was reported. The combination of this orbital period and the very low mass function is unique. The discoverers, Bailes et al. (2011, Science, 333, 1717), proposed an ultracompact X-ray binary (UCXB) as the progenitor system. However, the standard UCXB scenario would not produce this system as the time required to reach this orbital period exceeds the current estimate of the age of the Universe. The detached state of the system aggravates the problem. The inclination of the system is an important unknown, and Bailes et al. noted that for very low (a priori very unlikely) inclinations the system is better explained as having a brown dwarf companion rather than an UCXB origin.
Aims: We want to understand the evolutionary history of PSR J1719-1438, and determine under which circumstances it could have evolved from an UCXB.
Methods: We model UCXB evolution varying the donor size and investigate the effect of a wind mass loss from the donor, and compare the results with the observed characteristics of PSR J1719-1438.
Results: An UCXB can reach a 2.2 h orbit within the age of the Universe, provided that 1) the millisecond pulsar can significantly heat and expand the donor by pulsar irradiation, or 2) the system loses extra orbital angular momentum, e.g. via a fast wind from the donor.
Conclusions: The most likely scenario for the formation of PSR J1719-1438 is UCXB evolution driven by angular momentum loss via the usual gravitational wave emission, which is enhanced by angular momentum loss via a donor wind of ≳3 × 10-13 M☉ yr-1. Depending on the size of the donor during the evolution, the companion presently probably has a mass of ~1-3 Jupiter masses, making it a very low mass white dwarf as proposed by Bailes et al. Its composition can be either helium or carbon-oxygen. A helium white dwarf companion makes the long (for an UCXB) orbital period easier to explain, but the required inclination makes it a priori less likely than a carbon-oxygen white dwarf. 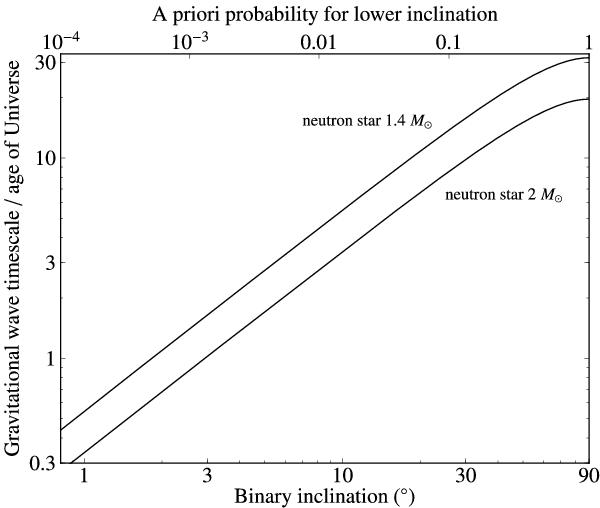