Context. Microlensing is a unique method to probe low mass exoplanets beyond the snow line. However, the scientific potential of the new microlensing planet discovery is often unfulfilled due to lack of knowledge of the properties of the lens and source stars. The discovery light curve of the super Earth MOA-2007-BLG-192Lb suffers from significant degeneracies that limit what can be inferred about its physical properties.
Aims: High resolution adaptive optics images allow us to solve this problem by resolving the microlensing target from all unrelated background stars, yielding the unique determination of magnified source and lens fluxes. This estimation permits the solution of our microlens model for the mass of the planet and its host and their physical projected separation.
Methods: We observed the microlensing event MOA-2007-BLG-192 at high angular resolution in JHKs with the NACO adaptive optics system on the VLT while the object was still amplified by a factor 1.23 and then at baseline 18 months later. We analyzed and calibrated the NACO photometry in the standard 2MASS system in order to accurately constrain the source and the lens star fluxes.
Results: We detect light from the host star of MOA-2007-BLG-192Lb, which significantly reduces the uncertainties in its characteristics as compared to earlier analyses. We find that MOA-2007-BLG-192L is most likely a very low mass late type M-dwarf (0.084-0.012+0.015 M⊙) at a distance of 660-70+100 pc orbited by a 3.2-1.8+5.2 M⊕ super-Earth at 0.66-0.22+0.51 AU. We then discuss the properties of this cold planetary system. 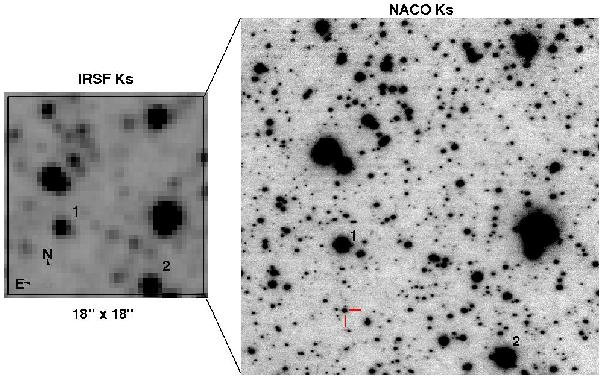