The effect of temperature mixing on the observable (T, β)-relation of interstellar dust clouds

Context. Detailed studies of the shape of dust emission spectra are possible thanks to the current instruments capable of simultaneous observations in several sub-millimetre bands (e.g., Herschel and Planck). The relationship between the observed spectra and the intrinsic dust grain properties is known to be affected by the noise and the line-of-sight temperature variations. However, some controversy remains even on the basic effects resulting from the mixing of temperatures along the line-of-sight or within the instrument beam.
Aims: Regarding the effect of temperature variations, previous studies have suggested either a positive or a negative correlation between the colour temperature TC and the observed spectral index βObs. Our aim is to show that both cases are possible and to determine the principal factors leading to either behaviour.
Methods: We start by studying the behaviour of the sum of two or three modified black bodies at different temperatures. Then, with radiative transfer models of spherical clouds, we examine the probability distributions of the dust mass as a function of the physical dust temperature. With these results as a guideline, we examine the (TC, βobs) relations for different sets of clouds.
Results: Even in the simple case of models consisting of two blackbodies at temperatures T0 and T0 + ΔT0, the correlation between TC and βobs can be either positive or negative. If one compares models where the temperature difference ΔT0 between the two blackbodies is varied, the correlation is negative. If the models differ in their mean temperature T0 rather than in ΔT0, the correlation remains positive. Radiative transfer models show that externally heated clouds have different mean temperatures but the widths of their temperature distributions are rather similar. Thus, in observations of samples of such clouds the correlation between TC and βObs is expected to be positive. The same result applies to clouds illuminated by external radiation fields of different intensity. For internally heated clouds a negative correlation is the more likely alternative.
Conclusions: Previous studies of the (TC,β) relation have been correct in that, depending on the cloud sample, both positive and negative correlations are possible. For externally heated clouds the effect is opposite to the negative correlation seen in the observations. If the signal-to-noise ratio is high, the observed negative correlation could be explained by the temperature dependence of the dust optical properties but that intrinsic dependence could be even steeper than the observed one. 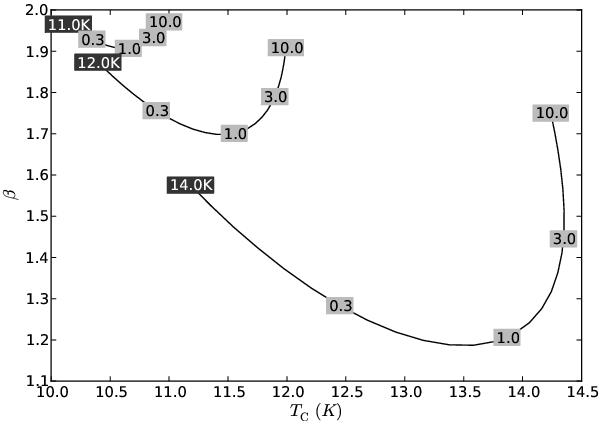