Context. Starbursts play an essential role in the evolution of galaxies. In these environments, massive stars, with their short lifetimes, are of particular importance. The stellar winds of massive stars significantly influence not only on their surroundings, but the associated mass loss also profoundly affects the evolution of the stars themselves. The evolution of the dense cores of massive starburst clusters is also affected by dynamical processes induced by N-body interactions, in addition to the evolution of each star, and the formation of very massive stars with masses up to several thousand solar masses may be decisive for the evolution of the cluster. The interpretation of the corresponding observations relies mainly on the theoretical modeling of such starbursts, which is a major challenge.
Aims: The primary objective is to introduce an advanced diagnostic method of O-type stellar atmospheres with winds, including an assessment of the accuracy of the determinations of abundances, stellar and wind parameters. Moreover, observational results are interpreted in the framework of our stationary, one-dimensional theory of line driven winds. Possible effects caused by non-homogeneous time dependent structures are also discussed.
Methods: We combine consistent models of expanding atmospheres with stellar evolutionary calculations of massive and very massive (up to several 1000 solar masses) single stars with regard to the evolution of dense stellar clusters. Essential in this context are accurate dynamic parameters of the winds of very massive stars. Because the atmospheric mass outflow has substantial influence on the radiation field and the atomic occupation numbers, and the radiation field and the occupation numbers in turn directly influence the radiative acceleration and thus the strength and velocity of the outflow, the determination of the hydrodynamic structures requires a highly consistent treatment of the statistical equilibrium and the hydrodynamic and radiative processes in the expanding atmospheres.
Results: We present computed mass loss rates, terminal wind velocities, and spectral energy distributions of massive and very massive stars of different metallicities, calculated from atmospheric models with an improved level of consistency. These computations have important implications for (i) the primordial chemical enrichment of Population III very massive stars; (ii) the age determination of globular clusters; and (iii) the formation of intermediate mass black holes in dense stellar clusters with respect to the importance of stellar wind mass loss for the evolution of their progenitor stars.
Conclusions: Stellar evolutionary calculations, using the mass loss rates of very massive stars obtained in the present paper, show that very massive stars with a low metallicity lose only a very small amount of their mass; thus it is unlikely that very massive population III stars cause a significant helium enrichment of the interstellar medium. Solar-metallicity stars have higher mass-loss rates, but these are not so high to exclude very massive stars of solar metallicity, formed by dynamical processes in dense clusters, from ending their life massive enough to form intermediate-mass black holes. 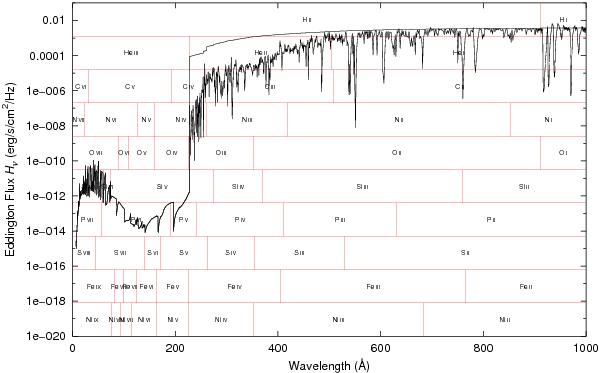