Context. The high number of planet discoveries made in the last years provides a good sample for statistical analysis, leading to some clues on the distributions of planet parameters, such as masses and periods, at least in close proximity to the host star. We likely need to wait for the extremely large telescopes (ELTs) to have an overall view of the extrasolar planetary systems. Those facilities will finally ensure an overlap of the discovery space of direct and indirect techniques, which is desirable to completely understand the nature of the discovered objects, obtaining both orbital parameters and physical characterization.
Aims: In this context it would be useful to have a tool that can be used for the interpretation of the present results that are obtained with various observing techniques, and also to predict what the outcomes would be of the future instruments.
Methods: For this reason we built MESS: a Monte Carlo simulation code that uses either the results of the statistical analysis of the properties of discovered planets or the results of the planet formation theories to build synthetic planet populations that are fully described in terms of frequency, orbital elements and physical properties. These synthetic planets can then be used to either test the consistency of their properties with the observed ones given different detection techniques (radial velocity, imaging and astrometry) or to predict the expected number of planets for future surveys, as well as to optimize the future multi-technique observations for their characterization down to telluric masses.
Results: In addition to the code description, we present here some of its applications to probe the physical and orbital properties of a putative companion within the circumstellar disk of a given star and to test or constrain the orbital distribution properties of a potential planet population around the members of the TW Hydrae association. Finally, we investigated the synergy of future space and ground-based telescopes instrumentation with the predictive mode of the code, to identify the mass-period parameter space that will be probed in future surveys for giant and rocky planets. 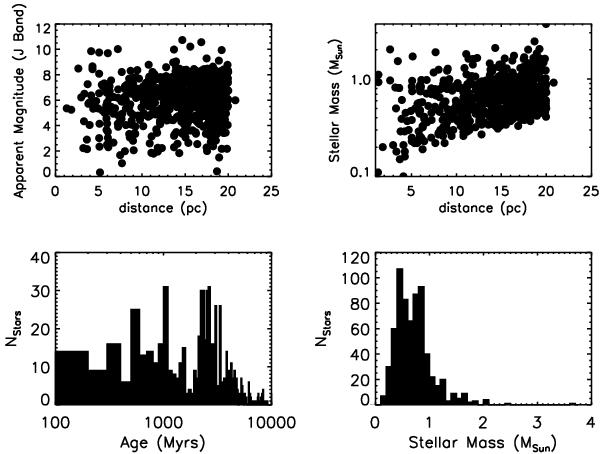