The low-inclination component of the Classical Kuiper Belt is host to a population of extremely widely separated binaries. These systems are similar to other trans-Neptunian binaries (TNBs) in that the primary and secondary components of each system are of roughly equal size. We have performed an astrometric monitoring campaign of a sample of seven wide-separation, long-period TNBs and present the first-ever well-characterized mutual orbits for each system. The sample contains the most eccentric (2006 CH69, em = 0.9) and the most widely separated, weakly bound (2001 QW322, a/RH ~= 0.22) binary minor planets known, and also contains the system with lowest-measured mass of any TNB (2000 CF105, M sys ~= 1.85 × 1017 kg). Four systems orbit in a prograde sense, and three in a retrograde sense. They have a different mutual inclination distribution compared to all other TNBs, preferring low mutual-inclination orbits. These systems have geometric r-band albedos in the range of 0.09-0.3, consistent with radiometric albedo estimates for larger solitary low-inclination Classical Kuiper Belt objects, and we limit the plausible distribution of albedos in this region of the Kuiper Belt. We find that gravitational collapse binary formation models produce an orbital distribution similar to that currently observed, which along with a confluence of other factors supports formation of the cold Classical Kuiper Belt in situ through relatively rapid gravitational collapse rather than slow hierarchical accretion. We show that these binary systems are sensitive to disruption via collisions, and their existence suggests that the size distribution of TNOs at small sizes remains relatively shallow. 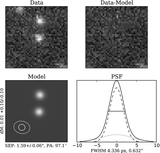