Currently three isolated radio pulsars and one binary radio pulsar with no evidence of any previous recycling are known in 97 surveyed Galactic globular clusters (GCs). As pointed out by Lyne et al., the presence of these pulsars cannot be explained by core-collapse supernovae, as commonly assumed for their counterparts in the Galactic disk. We apply a Bayesian analysis to the results from surveys for radio pulsars in GCs and find the number of potentially observable non-recycled radio pulsars present in all clusters to be <3600. Accounting for beaming and retention considerations, the implied birthrate for any formation scenario for all 97 clusters is <0.25 pulsars century-1 assuming a Maxwellian distribution of velocities with a dispersion of 10 km s-1. The implied birthrates for higher velocity dispersions are substantially higher than inferred for such pulsars in the Galactic disk. This suggests that the velocity dispersion of young pulsars in GCs is significantly lower than those of disk pulsars. These numbers may be substantial overestimates due to the fact that the currently known sample of young pulsars is observed only in metal-rich clusters. We propose that young pulsars may only be formed in GCs with metallicities with log[Fe/H] > - 0.6. In this case, the potentially observable population of such young pulsars is 447+1420 -399 (the error bars give a 95% confidence interval) and their birthrate is 0.012+0.037 -0.010 pulsars century-1. The most likely creation scenario to explain these pulsars is the electron capture supernova of an OMgNe white dwarf. 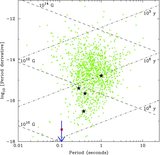