Discovery and Mass Measurements of a Cold, 10 Earth Mass Planet and Its Host Star

We present the discovery and mass measurement of the cold, low-mass planet MOA-2009-BLG-266Lb, performed with the gravitational microlensing method. This planet has a mass of mp = 10.4 ± 1.7 M⊕ and orbits a star of mass M sstarf = 0.56 ± 0.09 Msun at a semimajor axis of a = 3.2{+1.9\atop -0.5} AU and an orbital period of P = 7.6{+7.7\atop -1.5} yrs. The planet and host star mass measurements are enabled by the measurement of the microlensing parallax effect, which is seen primarily in the light curve distortion due to the orbital motion of the Earth. But the analysis also demonstrates the capability to measure the microlensing parallax with the Deep Impact (or EPOXI) spacecraft in a heliocentric orbit. The planet mass and orbital distance are similar to predictions for the critical core mass needed to accrete a substantial gaseous envelope, and thus may indicate that this planet is a "failed" gas giant. This and future microlensing detections will test planet formation theory predictions regarding the prevalence and masses of such planets. 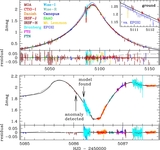