The recent discovery of an eclipsing hierarchical triple system with two low-mass stars in a close orbit (KOI-126) by Carter et al. appeared to reinforce the evidence that theoretical stellar evolution models are not able to reproduce the observational mass-radius relation for low-mass stars. We present a set of stellar models for the three stars in the KOI-126 system that show excellent agreement with the observed radii. This agreement appears to be due to the equation of state implemented by our code. A significant dispersion in the observed mass-radius relation for fully convective stars is demonstrated; indicative of the influence of physics currently not incorporated in standard stellar evolution models. We also predict apsidal motion constants for the two M dwarf companions. These values should be observationally determined to within 1% by the end of the Kepler mission. 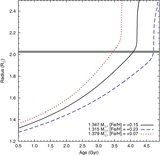