Dark Matter Halos in the Standard Cosmological Model: Results from the Bolshoi Simulation

Lambda Cold Dark Matter (ΛCDM) is now the standard theory of structure formation in the universe. We present the first results from the new Bolshoi dissipationless cosmological ΛCDM simulation that uses cosmological parameters favored by current observations. The Bolshoi simulation was run in a volume 250 h -1 Mpc on a side using ~8 billion particles with mass and force resolution adequate to follow subhalos down to the completeness limit of V circ = 50 km s-1 maximum circular velocity. Using merger trees derived from analysis of 180 stored time steps we find the circular velocities of satellites before they fall into their host halos. Using excellent statistics of halos and subhalos (~10 million at every moment and ~50 million over the whole history) we present accurate approximations for statistics such as the halo mass function, the concentrations for distinct halos and subhalos, the abundance of halos as a function of their circular velocity, and the abundance and the spatial distribution of subhalos. We find that at high redshifts the concentration falls to a minimum value of about 4.0 and then rises for higher values of halo mass—a new result. We present approximations for the velocity and mass functions of distinct halos as a function of redshift. We find that while the Sheth-Tormen (ST) approximation for the mass function of halos found by spherical overdensity is quite accurate at low redshifts, the ST formula overpredicts the abundance of halos by nearly an order of magnitude by z = 10. We find that the number of subhalos scales with the circular velocity of the host halo as V 1/2 host, and that subhalos have nearly the same radial distribution as dark matter particles at radii 0.3-2 times the host halo virial radius. The subhalo velocity function N(> V sub) scales as V -3 circ. Combining the results of Bolshoi and Via Lactea-II simulations, we find that inside the virial radius of halos with {V_circ}=200 {\,km s^{-1}} the number of satellites is N(> V sub) = (V sub/58 km s-1)-3 for satellite circular velocities in the range 4 km s-1 < V sub < 150 km s-1. 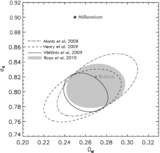