The Frequency of Low-mass Exoplanets. III. Toward η⊕ at Short Periods

Determining the occurrence rate of "super-Earth" planets (m sin i < 10 M ⊕) is a critically important step on the path toward determining the frequency of Earth-like planets (η⊕), and hence the uniqueness of our solar system. Current radial-velocity surveys, achieving precisions of 1 m s-1, are now able to detect super-Earths and provide meaningful estimates of their occurrence rate. We present an analysis of 67 solar-type stars from the Anglo-Australian Planet Search specifically targeted for very high precision observations. When corrected for incompleteness, we find that the planet occurrence rate increases sharply with decreasing planetary mass. Our results are consistent with those from other surveys: in periods shorter than 50 days, we find that 3.0% of stars host a giant (msin i > 100 M ⊕) planet, and that 17.4% of stars host a planet with msin i < 10 M ⊕. The preponderance of low-mass planets in short-period orbits is in conflict with formation simulations in which the majority of super-Earths reside at larger orbital distances. This work gives a hint as to the size of η⊕, but to make meaningful predictions on the frequency of terrestrial planets in longer, potentially habitable orbits, low-mass terrestrial planet searches at periods of 100-200 days must be made an urgent priority for ground-based Doppler planet searches in the years ahead. 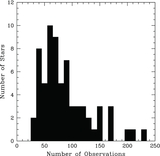