We present a study on four new star clusters discovered in the halo of the intriguing dwarf irregular galaxy NGC 6822 from a wide-field survey covering 3° × 3° area carried out with MegaCam at the Canada-France-Hawaii Telescope. The star clusters have extended structures with half-light radii R h ≈ 7.5-14.0 pc, larger than typical Galactic globular clusters and other known globular clusters in NGC 6822. The integrated colors and color-magnitude diagrams of resolved stars suggest that the new star clusters are 2-10 Gyr old and relatively metal poor with Z = 0.0001-0.004 based on the comparison with theoretical models. The projected distance of each star cluster from the galaxy center ranges from 10farcm7 (≈1.5 kpc) to 77' (≈11 kpc), far beyond the optical body of the galaxy. Interestingly, the new star clusters are aligned along the elongated old stellar halo of NGC 6822, which is almost perpendicular to the H I gas distribution where young stellar populations exist. We also find that the colors and half-light radii of the new clusters are correlated with the galactocentric distance: clusters farther from the galaxy center are larger and bluer than those closer to the galaxy center. We discuss the stellar structure and evolution of NGC 6822 implied by these new extended star clusters in the halo. We also discuss the current status of observational and theoretical understandings regarding the origin of extended star clusters in NGC 6822 and other galaxies.

Based on observations obtained with MegaPrime/MegaCam, a joint project of CFHT and CEA/DAPNIA, at the Canada-France-Hawaii Telescope (CFHT) which is operated by the National Research Council (NRC) of Canada, the Institut National des Science de l'Univers of the Centre National de la Recherche Scientifique (CNRS) of France, and the University of Hawaii. 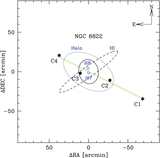