We present an analysis of the stellar kinematics of the Large Magellanic Cloud (LMC) based on ~5900 new and existing velocities of massive red supergiants, oxygen-rich and carbon-rich asymptotic giant branch (AGB) stars, and other giants. After correcting the line-of-sight velocities for the LMC's space motion and accounting for asymmetric drift in the AGB population, we derive a rotation curve that is consistent with all of the tracers used, as well as that of published H I data. The amplitude of the rotation curve is v 0 = 87 ± 5 km s-1 beyond a radius R 0 = 2.4 ± 0.1 kpc and has a position angle of the kinematic line of nodes of θ = 142° ± 5°. By examining the outliers from our fits, we identify a population of 376 stars, or gsim5% of our sample, that have line-of-sight velocities that apparently oppose the sense of rotation of the LMC disk. We find that these kinematically distinct stars are either counter-rotating in a plane closely aligned with the LMC disk, or rotating in the same sense as the LMC disk, but in a plane that is inclined by 54° ± 2° to the LMC. Their kinematics clearly link them to two known H I arms, which have previously been interpreted as being pulled out from the LMC. We measure metallicities from the Ca triplet lines of ~1000 LMC field stars and 30 stars in the kinematically distinct population. For the LMC field, we find a median [Fe/H] = -0.56 ± 0.02 with dispersion of 0.5 dex, while for the kinematically distinct stars the median [Fe/H] is -1.25 ± 0.13 with a dispersion of 0.7 dex. The metallicity differences provide strong evidence that the kinematically distinct population originated in the Small Magellanic Cloud. This interpretation has the consequence that the H I arms kinematically associated with the stars are likely falling into the LMC, instead of being pulled out. 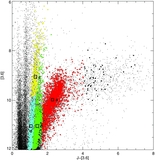