This is the second in a series of papers based on data from DISCS, a Submillimeter Array observing program aimed at spatially and spectrally resolving the chemical composition of 12 protoplanetary disks. We present data on six Southern sky sources—IM Lup, SAO 206462 (HD 135344b), HD 142527, AS 209, AS 205, and V4046 Sgr—which complement the six sources in the Taurus star-forming region reported previously. CO 2-1 and HCO+ 3-2 emission are detected and resolved in all disks and show velocity patterns consistent with Keplerian rotation. Where detected, the emission from DCO+ 3-2, N2H+ 3-2, H2CO 30 3 - 20 2 and 41 4 - 31 3, HCN 3-2, and CN 23 3/4/2 - 12 2/3/1 are also generally spatially resolved. The detection rates are highest toward the M and K stars, while the F star SAO 206462 has only weak CN and HCN emission, and H2CO alone is detected toward HD 142527. These findings together with the statistics from the previous Taurus disks support the hypothesis that high detection rates of many small molecules depend on the presence of a cold and protected disk midplane, which is less common around F and A stars compared to M and K stars. Disk-averaged variations in the proposed radiation tracer CN/HCN are found to be small, despite a two orders of magnitude range of spectral types and accretion rates. In contrast, the resolved images suggest that the CN/HCN emission ratio varies with disk radius in at least two of the systems. There are no clear observational differences in the disk chemistry between the classical/full T Tauri disks and transitional disks. Furthermore, the observed line emission does not depend on the measured accretion luminosities or the number of infrared lines detected, which suggests that the chemistry outside of 100 AU is not coupled to the physical processes that drive the chemistry in the innermost few AU. 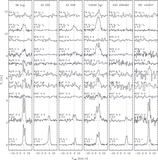