In this Letter, we report on a low-resolution spectroscopic survey for Li-rich K giants among 2000 low-mass (M <= 3 M sun) giants spanning the luminosity range from below to above the luminosity of the clump. Fifteen new Li-rich giants including four super Li-rich K giants (log epsilon(Li) >=3.2) were discovered. A significant finding is that there is a concentration of Li-rich K giants at the luminosity of the clump or red horizontal branch. This new finding is partly a consequence of the fact that our low-resolution survey is the first large survey to include giants well below and above the red giant branch (RGB) bump and clump locations in the H-R diagram. Origin of the lithium enrichment may be plausibly attributed to the conversion of 3He via 7Be to 7Li by the Cameron-Fowler mechanism but the location for the onset of the conversion is uncertain. Two possible opportunities to effect this conversion are discussed: the bump in the first ascent of the RGB and the He-core flash at the tip of the RGB. The finite luminosity spread of the Li-rich giants serves to reject the idea that Li enhancement is, in general, a consequence of a giant swallowing a large planet. 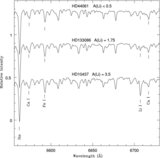