History and Modes of Star Formation in the Most Active Region of the Small Magellanic Cloud, NGC 346

We discuss the star formation history of the Small Magellanic Cloud (SMC) region NGC 346 based on Hubble Space Telescope images. The region contains both field stars and cluster members. Using a classical synthetic color-magnitude diagram (CMD) procedure applied to the field around NGC 346 we find that the star formation pace there has been rising, from a quite low rate 13 Gyr ago to ≈1.4 × 10-8 M sun yr-1 pc-2 in the last 100 Myr. This value is significantly higher than that in other star-forming regions of the SMC. For NGC 346 itself, we compare theoretical and observed CMDs of several stellar sub-clusters identified in the region, and we derive their basic evolution parameters. We find that NGC 346 experienced different star formation regimes, including a dominant and focused "high-density mode," with the sub-clusters hosting both pre-main-sequence (PMS) and upper main-sequence (UMS) stars, and a diffuse "low-density mode," as indicated by the presence of low-mass PMS sub-clusters. Quantitatively, the star formation in the oldest sub-clusters started about 6 Myr ago with remarkable synchronization, it continued at a high rate (up to 2 × 10-5 M sun yr-1 pc-2) for about 3 Myr and is now progressing at a lower rate. Interestingly, sub-clusters mainly composed of low-mass PMS stars now seem to experience the first episode of star formation, following multi-seeded spatial patterns, instead of resulting from a coherent trigger. Two speculative scenarios are put forth to explain the deficiency of UMS stars: the first invokes underthreshold conditions of the parent gas and the second speculates that the initial mass function is a function of time, with the youngest sub-clusters not having had sufficient time to form more massive stars.

Based on observations with the NASA/ESA Hubble Space Telescope, obtained at the Space Telescope Science Institute, which is operated by the Association of Universities for Research in Astronomy (AURA), Inc., under NASA contract NAS5-26555. These observations are associated with program GO10248. 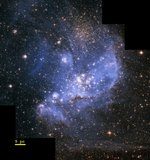