Context. The nearby multiple system δ Velorum contains a widely detached eclipsing binary and a third component.
Aims: We take advantage of this system offering the opportunity to determine the set of fundamental parameters (masses, luminosities, and radii) of three coeval stars with sufficient precision to test models of stellar evolution.
Methods: Extensive high-resolution spectroscopy is analyzed by the broadening function technique to provide the first spectroscopic orbit of the eclipsing pair. Simultaneous analysis of the spectroscopic data and the SMEI satellite light curve is performed to provide astrophysical parameters for the components. We use a modified Roche model assuming an eccentric orbit and asynchronous rotation.
Results: The observations show that components of the eclipsing pair rotate at about two-thirds of the break-up velocity, which excludes any chemical peculiarity and results in a non-uniform surface brightness. Although the inner orbit is eccentric, no apsidal motion is seen during the SMEI photometric observations. For the inner orbit, the orbital parameters are eccentricity e = 0.290, longitude of the periastron passage ω = 109°, and inclination 89.0°.
Conclusions: The component masses of MAa = 2.53 ± 0.11 M⊙, MAb = 2.37 ± 0.10 M⊙, and MB ~ 1.5 M⊙ combined with the inferred radii of the Aa and Ab components indicate that the eclipsing pair has already left the main sequence and that the estimated age of the system is about 400 Myr.

Reduced échelle spectra of Delta Velorum are available at the CDS via anonymous ftp to cdsarc.u-strasbg.fr (130.79.128.5) or via http://cdsarc.u-strasbg.fr/viz-bin/qcat?J/A+A/528/A21Table 1 and Figures 5, 6 are only available in electronic form at http://www.aanda.org 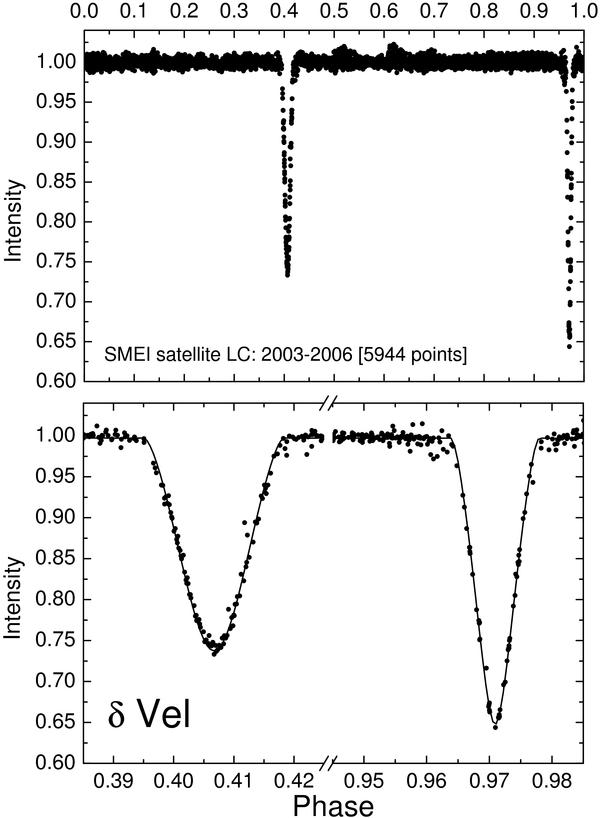