The nearby eclipsing stellar system δ Velorum. IV. Differential astrometry with VLT/NACO at the 100 microarcsecond level

Context. The stellar system δ Vel contains the brightest eclipsing binary in the southern sky (δ Vel A), and a nearby third star located ≈ 0.6″ away (δ Vel B). The proximity of δ Vel B (usable as a reference) makes it a particularly well-suited target to detect the astrometric displacement of the center of light of the eclipsing pair.
Aims: We obtained NACO astrometric observations with two goals: 1) to confirm the orientation of the orbital plane of the eclipsing pair on the sky determined by interferometry (Paper III); and 2) to demonstrate the capabilities of narrow-angle adaptive optics astrometry on a simple system with predictable astrometric properties.
Methods: We measured the angular separation vector between the eclipsing binary δ Vel A and the visual companion δ Vel B from narrow-band images at 2.17 μm obtained with the VLT/NACO adaptive optics system. Based on these observations and our previous determination of the orbital parameters of the wide binary δ Vel A-B, we derived the apparent displacement of the center of light of the eclipsing pair at 11 epochs over its orbital cycle.
Results: We detect the astrometric wobble of the center of light of the δ Vel A pair relative to B with a typical measurement precision of ≈ 50 μas per epoch, for a total amplitude of the measured displacement of ≈2 mas.
Conclusions: The detected wobble is in relatively good agreement with the model we presented in Paper III, and confirms the orientation of the Aab orbital plane on the sky. The residual dispersion compared to our model is 110 μas rms, which we tentatively attribute to photometric variability of the fast rotating A-type components Aa and/or Ab in the Brγ line. Based on these results, we conclude that in favorable conditions (bright source with only two resolved components, small angular separation), narrow-angle astrometry with adaptive optics on an 8-meter class telescope can reach an accuracy of 50 to 100 μas. 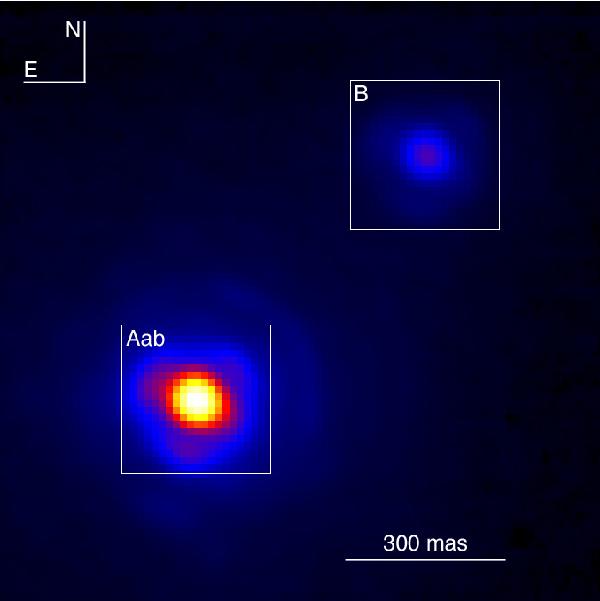