We present the statistical properties of the Cold Clump Catalogue of Planck Objects (C3PO), the first all-sky catalogue of cold objects, in terms of their spatial distribution, dust temperature, distance, mass, and morphology. We have combined Planck and IRAS data to extract 10342 cold sources that stand out against a warmer environment. The sources are distributed over the whole sky, including in the Galactic plane, despite the confusion, and up to high latitudes (>30°). We find a strong spatial correlation of these sources with ancillary data tracing Galactic molecular structures and infrared dark clouds where the latter have been catalogued. These cold clumps are not isolated but clustered in groups. Dust temperature and emissivity spectral index values are derived from their spectral energy distributions using both Planck and IRAS data. The temperatures range from 7K to 19K, with a distribution peaking around 13K. The data are inconsistent with a constant value of the associated spectral index β over the whole temperature range: β varies from 1.4 to 2.8, with a mean value around 2.1. Distances are obtained for approximately one third of the objects. Most of the detections lie within 2kpc of the Sun, but more distant sources are also detected, out to 7kpc. The mass estimates inferred from dust emission range from 0.4 M⊙ to 2.4 × 105 M⊙. Their physical properties show that these cold sources trace a broad range of objects, from low-mass dense cores to giant molecular clouds, hence the "cold clump" terminology. This first statistical analysis of the C3PO reveals at least two colder populations of special interest with temperatures in the range 7 to 12K: cores that mostly lie close to the Sun; and massive cold clumps located in the inner Galaxy. We also describe the statistics of the early cold core (ECC) sample that is a subset of the C3PO, containing only the 915 most reliable detections. The ECC is delivered as a part of the Planck Early Release Compact Source Catalogue (ERCSC). 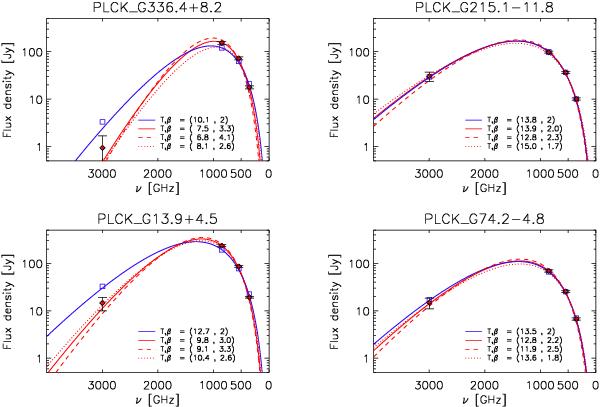