Context. The pulsation periods of long period variables (LPVs) depend on their mass and helium abundance as well as on their luminosity and metal abundance. Comparison of the observed periods of LPVs in globular clusters with models is capable of revealing the amount of mass lost on the giant branch and the helium abundance.
Aims: We aim to determine the amount of mass loss that has occurred on the giant branches of the low metallicity globular clusters NGC 362 and NGC 2808. We also aim to see if the LPVs in NGC 2808 can tell us about helium abundance variations in this cluster.
Methods: We have used optical monitoring of NGC 362 and NGC 2808 to determine periods for the LPVs in these clusters. We have made linear pulsation models for the pulsating stars in these clusters taking into account variations in mass and helium abundance.
Results: Reliable periods have been determined for 11 LPVs in NGC 362 and 15 LPVs in NGC 2808. Comparison of the observed variables with models in the log P-K diagram shows that mass loss of ~0.15-0.2 M☉ is required on the first giant branch in these clusters, in agreement with estimates from other methods. In NGC 2808, there is evidence that a high helium abundance of Y ~ 0.4 is required to explain the periods of several of the LPVs.
Conclusions: It would be interesting to determine periods for LPVs in other Galactic globular clusters where a helium abundance variation is suspected to see if the completely independent test for a high helium abundance provided by the LPVs can confirm the high helium abundance estimates. 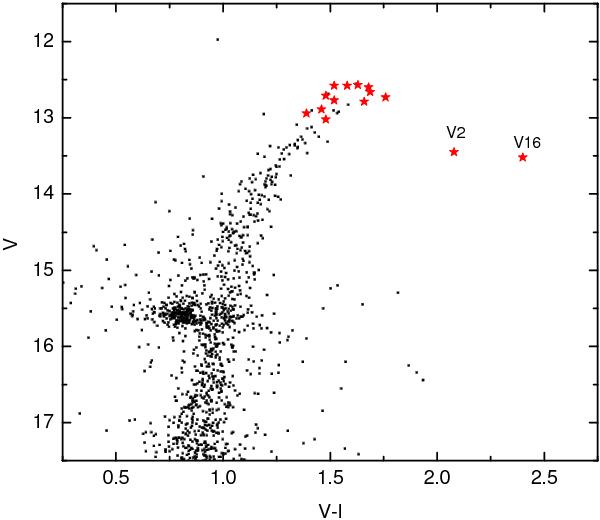