Context. Five different physical processes might be responsible for the formation of decretion disks around Be stars: fast rotation of the star, stellar pulsations, binarity, stellar winds, and magnetic fields. Our observations indicate that fast rotation seems to produce a disk in Keplerian rotation, at least in the specific case of the two stars observed. We do not know if this observational result is a generality or not.
Aims: We measure the size, orientation, shape, and kinematics of the disks around 2 Be stars, namely 48 Per and ψ Per.
Methods: We used the VEGA/CHARA interferometer with a spectral resolution of 5000 to obtain spectrally dispersed visibility modulus and phases within the Hα emission line.
Results: We were able to estimate the disk extension in the continuum and in the Hα line, as well as flattening, for both stars. Both stars rotate at nearly a critical rotation, but while the disk of 48 Per seems to be in Keplerian rotation, our preliminary data suggest that the disk of ψ Per is possibly faster than Keplerian, similarly to what has been found for κ CMa with observations carried out in the near-IR. However, more data is needed to confirm the fast rotation of the disk.
Conclusions: Assuming a simple uniform disk model for the stellar photosphere in the continuum and a Gaussian brightness distribution in the line emission region, we obtain a ratio of the disk diameter over the photospheric diameter of 8 for 48 Per and 11 for and ψ Per. We also found that the major axis of 48 Per is parallel to the polarization angle and not perpendicular to it as previously observed for many Be stars, including ψ Per. This might be due to the optical thickness of the disk, which is also responsible for the incoherent scattering of a non negligible part of the Hα line emission. To our knowledge, this is the first time that this effect has been measured in a Be star. 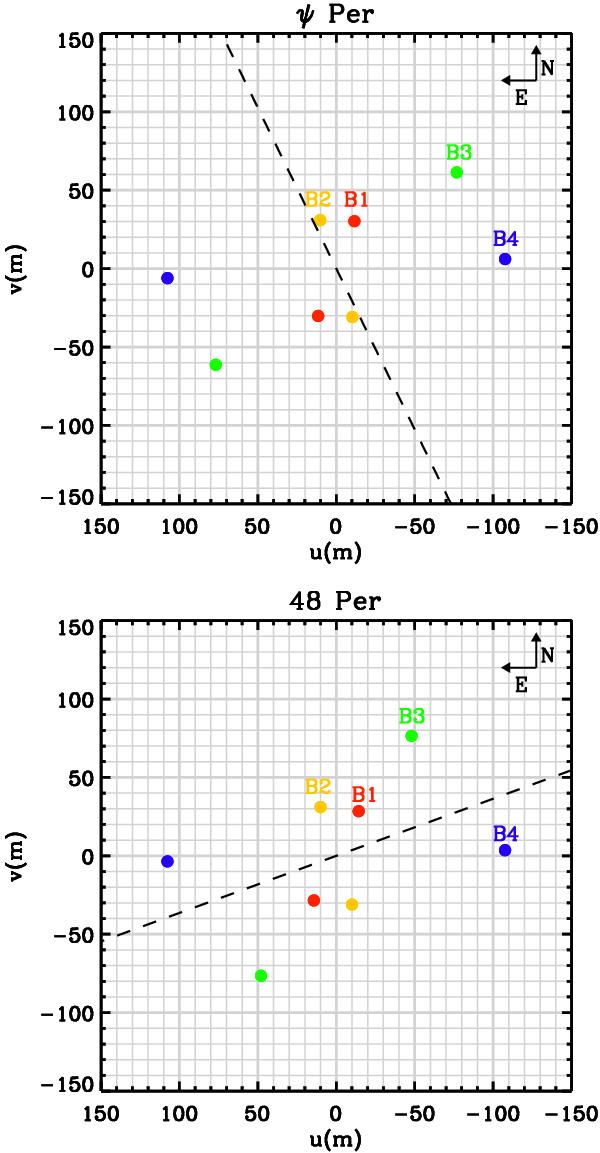