We examined six exoplanet host stars with non-standard Hipparcos astrometric solution, which may be indicative of unrecognised orbital motion. Using Hipparcos intermediate astrometric data, we detected the astrometric orbit of HD 5388 at a significance level of 99.4% (2.7 σ). HD 5388 is a metal-deficient star and hosts a planet candidate with a minimum mass of 1.96 MJ discovered in 2010. We determined its orbit inclination to be i = 178.3+0.4-0.7° and the corresponding mass of its companion HD 5388 b to be M2 = 69 ± 20 MJ. The orbit is seen almost face-on and the companion mass lies at the upper end of the brown-dwarf mass range. A mass lower than 13 MJ was excluded at the 3 σ-level. The astrometric motions of the five other stars had been investigated by other authors revealing two planetary companions, one stellar companion, and two statistically insignificant orbits. We conclude that HD 5388 b is not a planet but most likely a brown-dwarf companion. In addition, we find that the inclinations of the stellar rotation axis and the companion's orbital axis differ significantly. 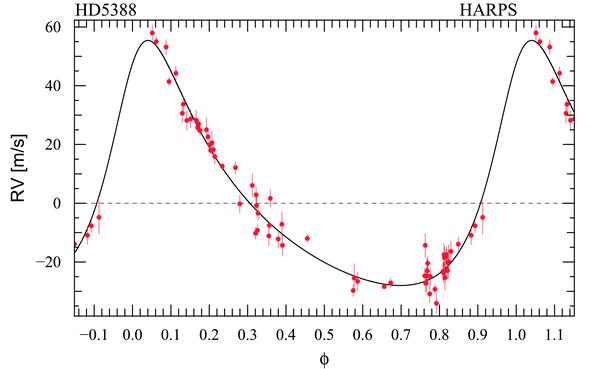