Distorted, nonspherical transiting planets: impact on the transit depth and on the radius determination

In this paper, we quantify the systematic impact of the nonspherical shape of transiting planets caused by tidal forces and rotation on the observed transit depth. Such a departure from sphericity leads to a bias in the derivation of the transit radius from the light curve and affects the comparison with planet structure and evolution models, which assume spherical symmetry. As the tidally deformed planet projects its smallest cross section area during the transit, the measured effective radius is smaller than the one of the unperturbed spherical planet (which is the radius predicted by 1D evolution models). This effect can be corrected by calculating the theoretical shape of the observed planet. Using a variational method and a simple polytropic assumption for the gaseous planet structure, we derived simple analytical expressions for the ellipsoidal shape of a fluid object (star or planet) accounting for both tidal and rotational deformations. We determined the characteristic polytropic indexes that describe the structures of irradiated close-in planets within the mass range 0.3 MJ < Mp < 75 MJ, at different ages, by comparing polytropic models with the inner density profiles calculated with the full evolution code. Our calculations yield a 20% effect on the transit depth, i.e. a 10% decrease in the measured radius, for the extreme case of a 1 MJ planet orbiting a Sun-like star at 0.01 AU, and the effect can be greater for lower mass objects. For the closest planets detected so far ( ≲ 0.05 AU), the effect on the radius is of the order of 1 to 10%, by no means a negligible effect, enhancing the puzzling problem of the anomalously large bloated planets. These corrections must thus be taken into account for correctly determining the radius from the transit light curve and when comparing theoretical models with observations. Our analytical expressions can be easily used to calculate these corrections, caused by the nonspherical shape of the planet, on the observed transit depth and thus to derive the planet's real equilibrium radius, the one to be used when comparing models with observations. They can also be used to model ellipsoidal variations in the stellar flux now detected in the CoRoT and Kepler light curves. We also derive directly usable analytical expressions for the moment of inertia and the Love number (k2) of a fluid planet as a function of its mass and, in the case of significant rotation, for its oblateness.

Tables B.2 and B.3 are only available in electronic form at http://www.aanda.org 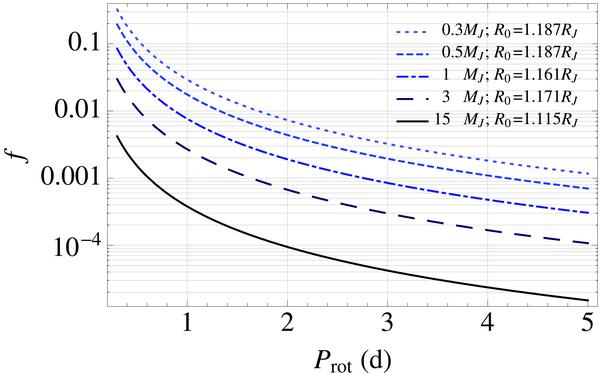