Thin shell morphology in the circumstellar medium of massive binaries

Context. In massive binaries, the powerful stellar winds of the two stars collide, leading to the formation of shock-dominated environments that can be modeled only in 3D.
Aims: We investigate the morphology of the collision-front shell between the stellar winds of binary components in two long-period binary systems, one consisting of a hydrogen-rich Wolf-Rayet star (WNL) and an O-star and the other of a luminous blue variable (LBV) and an O-star. We follow the development and evolution of instabilities due to both the wind interaction and the orbital motion, that form in this shell if it is sufficiently compressed.
Methods: We use MPI-AMRVAC to time-integrate the equations of hydrodynamics, combined with optically thin radiative cooling, on an adaptive mesh 3D grid. Using parameters for generic binary systems, we simulate the interaction between the winds of the two stars.
Results: The WNL + O star binary represent a typical example of an adiabatic wind collision. The resulting shell is thick and smooth, showing no instabilities. On the other hand, the shell created by the collision of the O star wind with the LBV wind, as well as the orbital motion of the binary components, is susceptible to thin shell instabilities, which create a highly structured morphology. We identify the instabilities as both linear and non-linear thin-shell instabilities, there being distinct differences between the leading and the trailing parts of the collision front. We also find that for binaries containing a star with a (relatively) slow wind, the global shape of the shell is determined more by the slow wind velocity and the orbital motion of the binary, than the ram pressure balance between the two winds.
Conclusions: Additional parametric studies of the interaction between the massive binary winds are needed to identify the role and dynamical importance of multiple instabilities at the collision front, as shown here for an LBV + O star system. 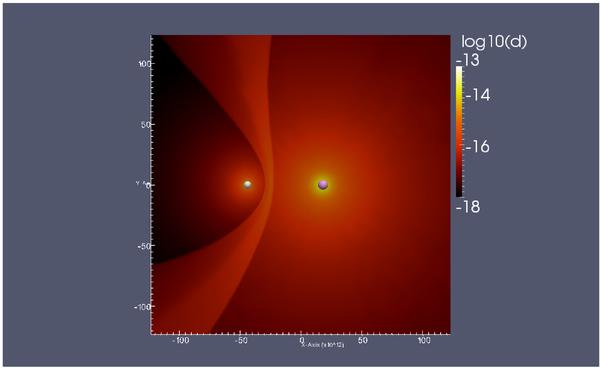