The merger of two white dwarfs (aka double-degenerate merger) has often been cited as a potential progenitor of Type Ia supernovae. Here we combine population synthesis, merger, and explosion models with radiation-hydrodynamics light-curve models to study the implications of such a progenitor scenario on the observed Type Ia supernova population. Our standard model, assuming double-degenerate mergers do produce thermonuclear explosions, produces supernova light curves that are broader than the observed type Ia sample. In addition, we discuss how the shock breakout and spectral features of these double-degenerate progenitors will differ from the canonical bare Chandrasekhar-massed explosion models. We conclude with a discussion of how one might reconcile these differences with current observations. 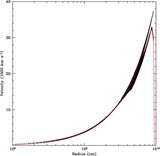