We present the results of a three year monitoring program of a sample of very low mass (VLM) field binaries using both astrometric and spectroscopic data obtained in conjunction with the laser guide star adaptive optics system on the W. M. Keck II 10 m telescope. Among the 24 systems studied, 15 have undergone sufficient orbital motion, allowing us to derive their relative orbital parameters and hence their total system mass. These measurements more than double the number of mass measurements for VLM objects, and include the most precise mass measurement to date (<2%). Among the 11 systems with both astrometric and spectroscopic measurements, six have sufficient radial velocity variations to allow us to obtain individual component masses. This is the first derivation of the component masses for five of these systems. Altogether, the orbital solutions of these low mass systems show a correlation between eccentricity and orbital period, consistent with their higher mass counterparts. In our primary analysis, we find that there are systematic discrepancies between our dynamical mass measurements and the predictions of theoretical evolutionary models (TUCSON and LYON) with both models either underpredicting or overpredicting the most precisely determined dynamical masses. These discrepancies are a function of spectral type, with late-M through mid-L systems tending to have their masses underpredicted, while one T-type system has its mass overpredicted. These discrepancies imply that either the temperatures predicted by evolutionary and atmosphere models are inconsistent for an object of a given mass, or the mass-radius relationship or cooling timescales predicted by the evolutionary models are incorrect. If these spectral-type trends are correct and hold into the planetary mass regime, the implication is that the masses of directly imaged extrasolar planets are overpredicted by the evolutionary models. 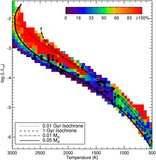