We present a kinematic analysis of the globular cluster (GC) system in the giant elliptical galaxy (gE) NGC 4636 in the Virgo cluster. Using the photometric and spectroscopic database of 238 GCs (108 blue GCs and 130 red GCs) at the galactocentric radius 0farcm39 < R < 15farcm43, we have investigated the kinematics of the GC system. The NGC 4636 GC system shows weak overall rotation, which is dominated by the red GCs. However, both the blue GCs and red GCs show some rotation in the inner region at R < 4farcm3 (=2.9R eff = 18.5 kpc). The velocity dispersion for all the GCs is derived to be σ p = 225+12 -9 km s-1. The velocity dispersion for the blue GCs (σ p = 251+18 -12 km s-1) is slightly larger than that for the red GCs (σ p = 205+11 -13 km s-1). The velocity dispersions for the blue GCs about the mean velocity and about the best-fit rotation curve have a significant variation depending on the galactocentric radius. Comparison of observed stellar and GC velocity dispersion profiles (VDPs) with the VDPs calculated from the stellar mass profile shows that the mass-to-light ratio should increase as the galactocentric distance increases, indicating the existence of an extended dark matter halo. From the comparison of the observed GC VDPs and the VDPs calculated for the X-ray mass profiles in the literature, we find that the orbit of the GC system is tangential, and that the orbit of the red GCs is slightly more tangential than that of the blue GCs. We compare the GC kinematics of NGC 4636 with those of other six gEs, finding that the kinematic properties of the GCs are diverse among gEs. We find several correlations between the kinematics of the GCs and the global parameters of their host galaxies. We discuss the implication of the results for the formation models of the GC system in gEs, and suggest a mixture scenario for the origin of the GCs in gEs.

Based on data collected at the Subaru Telescope, which is operated by the National Astronomical Observatory of Japan. 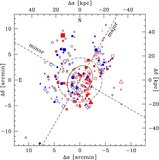