Spitzer observations of the Large Magellanic Cloud (LMC) have revealed a large population of young stellar objects (YSOs), but complementary high-resolution images in the optical or near-IR wavelengths are still needed to resolve the multiplicity and immediate environments of the YSOs. The Hubble Space Telescope imaged the star-forming region NGC 2074 in the LMC during its 100,000th orbit, providing an opportunity to more closely examine the YSOs and their environments in this region. We have studied the 10 YSO candidates identified from Spitzer observations, confirming their nature and determining their physical parameters by modeling their spectral energy distributions. The majority of the YSOs and central stars of ultracompact H II regions in NGC 2074 have masses consistent with spectral types of early B to late O. The co-existence of massive early-type O stars and the less massive YSOs indicates that their formation may have started at a similar time, a few 105 yr ago. NGC 2074 provides an opportunity to study the evolution of massive stars at their infancy. 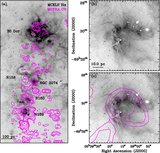