Substellar objects, like planets and brown dwarfs orbiting stars, are by-products of the star formation process. The evolution of their host stars may have an enormous impact on these small companions. Vice versa a planet might also influence stellar evolution as has recently been argued. Here, we report the discovery of an 8-23 Jupiter-mass substellar object orbiting the hot subdwarf HD 149382 in 2.391 d at a distance of only about five solar radii. Obviously, the companion must have survived engulfment in the red giant envelope. Moreover, the substellar companion has triggered envelope ejection and enabled the sdB star to form. Hot subdwarf stars have been identified as the sources of the unexpected ultraviolet (UV) emission in elliptical galaxies, but the formation of these stars is not fully understood. Being the brightest star of its class, HD 149382 offers the best conditions to detect the substellar companion. Hence, undisclosed substellar companions offer a natural solution for the long-standing formation problem of apparently single hot subdwarf stars. Planets and brown dwarfs may therefore alter the evolution of old stellar populations and may also significantly affect the UV emission of elliptical galaxies. 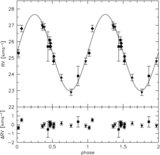