The Horizon Run N-Body Simulation: Baryon Acoustic Oscillations and Topology of Large-scale Structure of the Universe

In support of the new III survey, which will measure the baryon oscillation scale using the luminous red galaxies (LRGs), we have run the largest N-body simulation to date using 41203 = 69.9 billion particles, and covering a volume of (6.592 h -1 Gpc)3. This is over 2000 times the volume of the Millennium Run, and corner-to-corner stretches all the way to the horizon of the visible universe. LRGs are selected by finding the most massive gravitationally bound, cold dark matter subhalos, not subject to tidal disruption, a technique that correctly reproduces the three-dimensional topology of the LRGs in the Sloan Survey. We have measured the covariance function, power spectrum, and the three-dimensional topology of the LRG distribution in our simulation and made 32 mock surveys along the past light cone to simulate the Sloan III survey. Our large N-body simulation is used to accurately measure the nonlinear systematic effects such as gravitational evolution, redshift space distortion, past light cone space gradient, and galaxy biasing, and to calibrate the baryon oscillation scale and the genus topology. For example, we predict from our mock surveys that the baryon acoustic oscillation peak scale can be measured with the cosmic variance-dominated uncertainty of about 5% when the SDSS-III sample is divided into three equal volume shells, or about 2.6% when a thicker shell with 0.4 < z < 0.6 is used. We find that one needs to correct the scale for the systematic effects amounting up to 5.2% to use it to constrain the linear theories. The uncertainty in the amplitude of the genus curve is expected to be about 1% at 15 h -1 Mpc scale. We are making the simulation and mock surveys publicly available. 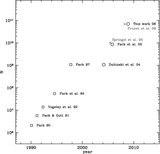