We are using the Very Long Baseline Array and the Japanese VLBI Exploration of Radio Astronomy project to measure trigonometric parallaxes and proper motions of masers found in high-mass star-forming regions across the Milky Way. Early results from 18 sources locate several spiral arms. The Perseus spiral arm has a pitch angle of 16° ± 3°, which favors four rather than two spiral arms for the Galaxy. Combining positions, distances, proper motions, and radial velocities yields complete three-dimensional kinematic information. We find that star-forming regions on average are orbiting the Galaxy ≈15 km s-1 slower than expected for circular orbits. By fitting the measurements to a model of the Galaxy, we estimate the distance to the Galactic center R 0 = 8.4 ± 0.6 kpc and a circular rotation speed Θ0 = 254 ± 16 km s-1. The ratio Θ0/R 0 can be determined to higher accuracy than either parameter individually, and we find it to be 30.3 ± 0.9 km s-1 kpc-1, in good agreement with the angular rotation rate determined from the proper motion of Sgr A*. The data favor a rotation curve for the Galaxy that is nearly flat or slightly rising with Galactocentric distance. Kinematic distances are generally too large, sometimes by factors greater than 2; they can be brought into better agreement with the trigonometric parallaxes by increasing Θ0/R 0 from the IAU recommended value of 25.9 km s-1 kpc-1 to a value near 30 km s-1 kpc-1. We offer a "revised" prescription for calculating kinematic distances and their uncertainties, as well as a new approach for defining Galactic coordinates. Finally, our estimates of Θ0 and Θ0/R 0, when coupled with direct estimates of R 0, provide evidence that the rotation curve of the Milky Way is similar to that of the Andromeda galaxy, suggesting that the dark matter halos of these two dominant Local Group galaxy are comparably massive. 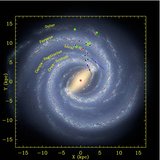