The Large Area Telescope (Fermi/LAT, hereafter LAT), the primary instrument on the Fermi Gamma-ray Space Telescope (Fermi) mission, is an imaging, wide field-of-view (FoV), high-energy γ-ray telescope, covering the energy range from below 20 MeV to more than 300 GeV. The LAT was built by an international collaboration with contributions from space agencies, high-energy particle physics institutes, and universities in France, Italy, Japan, Sweden, and the United States. This paper describes the LAT, its preflight expected performance, and summarizes the key science objectives that will be addressed. On-orbit performance will be presented in detail in a subsequent paper. The LAT is a pair-conversion telescope with a precision tracker and calorimeter, each consisting of a 4 × 4 array of 16 modules, a segmented anticoincidence detector that covers the tracker array, and a programmable trigger and data acquisition system. Each tracker module has a vertical stack of 18 (x, y) tracking planes, including two layers (x and y) of single-sided silicon strip detectors and high-Z converter material (tungsten) per tray. Every calorimeter module has 96 CsI(Tl) crystals, arranged in an eight-layer hodoscopic configuration with a total depth of 8.6 radiation lengths, giving both longitudinal and transverse information about the energy deposition pattern. The calorimeter's depth and segmentation enable the high-energy reach of the LAT and contribute significantly to background rejection. The aspect ratio of the tracker (height/width) is 0.4, allowing a large FoV (2.4 sr) and ensuring that most pair-conversion showers initiated in the tracker will pass into the calorimeter for energy measurement. Data obtained with the LAT are intended to (1) permit rapid notification of high-energy γ-ray bursts and transients and facilitate monitoring of variable sources, (2) yield an extensive catalog of several thousand high-energy sources obtained from an all-sky survey, (3) measure spectra from 20 MeV to more than 50 GeV for several hundred sources, (4) localize point sources to 0.3-2 arcmin, (5) map and obtain spectra of extended sources such as SNRs, molecular clouds, and nearby galaxies, (6) measure the diffuse isotropic γ-ray background up to TeV energies, and (7) explore the discovery space for dark matter. 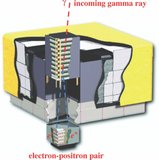