Formation of massive stars by accretion requires a high accretion rate of \dot{M}_* > 10^{-4} M_{⊙} yr^{-1} to overcome the radiation pressure barrier of the forming stars. Here, we study evolution of protostars accreting at such high rates by solving the structure of the central star and the inner accreting envelope simultaneously. The protostellar evolution is followed starting from small initial cores until their arrival at the stage of the Zero-Age Main-Sequence (ZAMS) stars. An emphasis is put on evolutionary features different from those with a low accretion rate of \dot{M}_* ∼ 10^{-5} M_{⊙} yr^{-1}, which is presumed in the standard scenario for low-mass star formation. With the high accretion rate of \dot{M}_* ∼ 10^{-3} M_{⊙} yr^{-1}, the protostellar radius becomes very large and exceeds 100 R sun. Unlike the cases of low accretion rates, deuterium burning hardly affects the evolution, and the protostar remains radiative even after its ignition. It is not until the stellar mass reaches sime40 M sun that hydrogen burning begins and the protostar reaches the ZAMS phase, and this ZAMS arrival mass increases with the accretion rate. These features are similar to those of the first star formation in the universe, where high accretion rates are also expected, rather than to the present-day low-mass star formation. At a very high accretion rate of >3 × 10-3 M sun yr-1, the total luminosity of the protostar becomes so high that the resultant radiation pressure inhibits the growth of the protostars under steady accretion before reaching the ZAMS stage. Therefore, the evolution under the critical accretion rate 3 × 10-3 M sun yr-1 gives the upper mass limit of possible pre-main sequence stars at sime60 M sun. The upper mass limit of MS stars is also set by the radiation pressure onto the dusty envelope under the same accretion rate at sime250 M sun. We also propose that the central source enshrouded in the Orion KL/BN nebula has effective temperature and luminosity consistent with our model and is a possible candidate for such protostars growing under the high accretion rate. 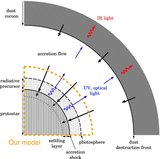