Spatial Extension in the Ultraviolet Spectrum of VV Cephei

Two-dimensional processing of Hubble Space Telescope/Space Telescope Imaging Spectrograph (HST/STIS) echelle spectra of the eclipsing M2 Iab + B binary system, VV Cep, has revealed extended emission in all 21 epochs observed, ranging from midtotality through the first quadrature. In the ultraviolet accessible to STIS (1150- 3150 Å), essentially all observed photons originate from the hot component. In total eclipse, a pure emission spectrum is seen, with strong lines from lower levels up to ~2 eV cut by blue-shifted absorption in the M supergiant wind. Out of eclipse, a continuum is observed upon which a rich absorption spectrum of mostly neutral and singly-ionized iron group elements is superimposed. Out of eclipse, the strongest absorption features sit atop the emission profiles seen during eclipse. Far from eclipse, the neutral lines disappear, and the strongest of the remaining absorption lines develop complex inverse P-Cygni profiles. The continuum and spectrally extended blue wings of the inverse P-Cygni spectral lines show a spatial extension characteristic of the HST/STIS response to an unresolved source. However, the emission components of spectral lines lying longward of the blue-shifted wind absorption typically show flux extending beyond the unresolved hot component, implying formation over an extended region much larger than the size of the binary orbit. This extended line emission is believed to be formed by scattering of photons from the hot component's continuum by ions in ground and low-lying metastable levels in the extended wind of the M supergiant. Extension is observed out of eclipse for lines with lower levels up to approximately 4 eV, but the greatest degree of extension is observed for lines with lower levels less than 2 eV. Radial velocity differences across the spatially extended emission correlate with the aperture position angle, consistent with model predictions for wind flow in a binary system in which the wind outflow is comparable to the orbital velocity, and indicate an orbital plane oriented from +11° E of N (receding) through -169° (approaching). 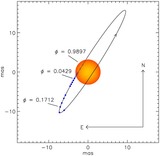