I Zw 18 Revisited with HST ACS and Cepheids: New Distance and Age

We present new V- and I-band HST ACS photometry of I Zw 18, the most metal-poor blue compact dwarf (BCD) galaxy in the nearby universe. It has been argued in the past that I Zw 18 is a very young system that started forming stars only <~500 Myr ago, but other work has hinted that older (>~1 Gyr) red giant branch (RGB) stars may also exist. Our new data, once combined with archival HST ACS data, provide a deep and uncontaminated optical color-magnitude diagram (CMD) that now strongly indicates an RGB. The RGB tip (TRGB) magnitude yields a distance modulus (m-M)0=31.30+/-0.17, i.e., D=18.2+/-1.5 Mpc. The time-series nature of our observations allows us to also detect and characterize for the first time three classical Cepheids in I Zw 18. The time-averaged Cepheid <V> and <I> magnitudes are compared to the VI reddening-free Wesenheit relation predicted from new nonlinear pulsation models specifically calculated at the metallicity of I Zw 18. For the one bona fide classical Cepheid with a period of 8.63 days this implies a distance modulus (m-M)0=31.42+/-0.26. The other two Cepheids have unusually long periods (125.0 and 129.8 days) but are consistent with this distance. The coherent picture that emerges is that I Zw 18 is farther away than previously assumed and older than suggested by some previous works. The presence of an RGB population rules out the possibility that I Zw 18 is a truly primordial galaxy formed recently (z<~0.1) in the local universe.

Based on observations with the NASA/ESA Hubble Space Telescope, obtained at the Space Telescope Science Institute, which is operated by AURA for NASA under contract NAS5-26555. 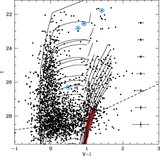