We combine several HST investigations on the central structure of early-type galaxies to generate a large sample of surface photometry. The studies selected were those that used the ``Nuker law'' to characterize the inner light distributions of the galaxies. The sample comprises WFPC1 and WFPC2 V-band observations published earlier by our group, R-band WFPC2 photometry of Rest et al., NICMOS H-band photometry by Ravindranath et al. and Quillen et al., and the brightest cluster galaxy WFPC2 I-band photometry of Laine et al. The distribution of the logarithmic slopes of the central brightness profiles strongly affirms that the central structure of elliptical galaxies with MV<-19 is bimodal, based on both parametric and nonparametric analysis. At the HST resolution limit, most galaxies are either power-law systems, which have steep cusps in surface brightness, or core systems, which have shallow cusps interior to a steeper envelope brightness distribution. A rapid transition between the two forms occurs over the luminosity range -22<MV<-20, with cores dominating at the highest luminosities and power laws at the lowest. There are a few ``intermediate'' systems that have both cusp slopes and total luminosities that fall within the core/power-law transition, but they are rare and do not fill in the overall bimodal distribution. 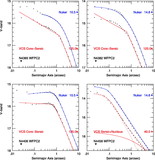