The explosion of a carbon-oxygen white dwarf as a Type Ia supernova is known to be sensitive to the manner in which the burning is ignited. Studies of the presupernova evolution suggest asymmetric, off-center ignition, and here we explore its consequences in two- (2D) and three-dimensional (3D) simulations. Compared with centrally ignited models, one-sided ignitions initially burn less and release less energy. For the distributions of ignition points studied, ignition within two hemispheres typically leads to the unbinding of the white dwarf, while ignition within a small fraction of one hemisphere does not. We also examine the spreading of the blast over the surface of the white dwarf that occurs as the first plumes of burning erupt from the star. In particular, our studies test whether the collision of strong compressional waves can trigger a detonation on the far side of the star as has been suggested by Plewa and coworkers. The maximum temperature reached in these collisions is sensitive to how much burning and expansion has already gone on, and to the dimensionality of the calculation. Although detonations are sometimes observed in 2D models, none ever happens in the corresponding 3D calculations. Collisions between the expansion fronts of multiple bubbles also seem, in the usual case, unable to ignite a detonation. ``Gravitationally confined detonation'' is therefore not a robust mechanism for the explosion. Detonation may still be possible in these models, however, either following a pulsation or by spontaneous detonation if the turbulent energy is high enough. 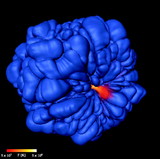