A Survey of Galaxy Kinematics to z~1 in the TKRS/GOODS-N Field. II. Evolution in the Tully-Fisher Relation

We use kinematic measurements of a large sample of galaxies from the Team Keck Redshift Survey in the GOODS-N field to measure evolution in the optical and near-IR Tully-Fisher (TF) relations to z=1.2. We construct TF relations with integrated line-of-sight velocity widths of ~1000 galaxies in B and ~670 in J; these relations have large scatter, and we derive a maximum likelihood least-squares method for fitting in the presence of scatter. The B-band TF relations, from z=0.4 to 1.2, show evolution of ~1.0-1.5 mag internal to our sample without requiring calibration to a local TF relation. There is evolution in both TF intercept and slope, suggesting differential luminosity evolution. In J band, there is evolution in slope but little evolution in overall luminosity. The slope measurements imply that bright, massive blue galaxies fade more strongly than fainter blue galaxies from z~1.2 to now. This conclusion runs counter to some previous measurements and to our naive expectations, but we present a simple set of star formation histories to show that it arises naturally if massive galaxies have shorter timescales of star formation, forming most of their stars before z~1, while less massive galaxies form stars at more slowly declining rates. This model predicts that the higher global star formation rate at z~1 is mostly due to higher star formation rate in massive galaxies. The amount of fading in B constrains star formation timescale more strongly than redshift of formation. TF and color-magnitude relations can provide global constraints on the luminosity evolution and star formation history of blue galaxies.

Based in part on observations taken at the W. M. Keck Observatory, which is operated jointly by the University of California and the California Institute of Technology. 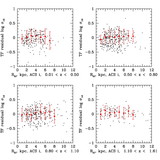