We present the results of HST observations of the host star for the first definitive extrasolar planet detected by microlensing. The light-curve model for this event predicts that the lens star should be separated from the source star by ~6 mas at the time of the HST images. If the lens star is a late G, K, or early M dwarf, then it will be visible in the HST images as an additional source of light that is blended with the source image. Unless the lens and source have exactly the same colors, its presence will also be revealed by a systematic shift between centroids of the source plus lens in different filter bands. The HST data indicate both of these effects: the HST source that matches the position of the source star is 0.21 mag brighter in the ACS/HRC F814W filter than the microlensing model predicts, and there is an offset of ~0.7 mas between the centroid of this source in the F814W and F435W filter bands. We conclude that the planetary host star has been detected in these HST images, and this identification of the lens star enables a complete solution of the lens system. The lens parameters are determined with a Bayesian analysis, averaging over uncertainties in the measured parameters, interstellar extinction, and allowing for the possibility of a binary companion to the source star. This yields a stellar mass of M*=0.63+0.07-0.09 Msolar and a planet mass of Mp=2.6+0.8-0.6MJ at an orbital separation of 4.3+2.5-0.8 AU. Thus, the lens system resembles our own solar system, with a planet of ~3MJ in a Jupiter-like orbit around a star of 2/3 Msolar. These conclusions can be tested with future HST images, which should reveal a broadening of the blended source-plus-lens point-spread function due to the relative lens-source proper motion.

Based on observations made with the NASA/ESA Hubble Space Telescope obtained at the Space Telescope Science Institute under program GO-10426, which is operated by the Association of Universities for Research in Astronomy, Inc., under NASA contract NAS 5-26555. 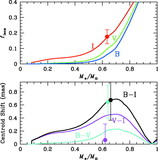