We present a candidate sample of luminous bulges (including ellipticals) found within the Groth Strip Survey (GSS), with spectroscopic redshifts of 0.73<z<1.04 from the Keck Telescope. This work is distinguished by its use of two-dimensional two-component decomposition photometry from Hubble Space Telescope (HST) images to separate the bulge from any disk before applying the sample selection and to measure disk-free colors. We define a statistically complete sample of 86 bulges with r1/4 profiles and luminosities brighter than IAB=24. Although larger samples of distant early-type galaxies exist, this is the largest and most homogeneous sample of bulges at z~1 with spectroscopy. A brighter subset of 52 objects with added structural constraints defines our ``quality sample'' that is used to explore bulge luminosities and colors.

We find that 85% of luminous (MB<-19) field bulges at redshift z~0.8 are nearly as red (U-B~0.50) as local E/S0s. Almost all (90%) of these very red bulges reside in galaxies with the morphologies of normal early-type or spiral galaxies. Moreover, the slope of the color-luminosity relation is shallow (-0.04+/-0.04) and the intrinsic U-B color dispersion is small (σ<~0.03 mag), suggesting roughly coeval formation. All three results are similar to that seen among early-type cluster galaxies at the same epoch. Yet we also measured ~1 mag increase in surface brightness. Since simple passive evolution of a single-burst stellar population results in redder colors as the galaxy fades, the observed constancy of very red colors at high redshift suggests more complex histories. One alternative starts with a metal-rich (twice solar), early-formation (z~1.5-2.0) population that is later polluted with small amounts (~4% by total mass) of star formation over an extended period of several Gyr. This ``drizzling'' history is supported by our finding spectroscopic evidence for continued star formation ([O II] emission lines) among 80% of luminous high-redshift galaxies that have very red colors in both their bulges and disks. Although some very red (U-B>=0.25) disks are found, almost all disks have the same or bluer colors than their accompanying bulges, regardless of the bulge-disk ratio and bulge luminosity. This result matches the results of semianalytic hierarchical galaxy formation models, in which massive bulges are assembled from major mergers of large disks with accompanying disks forming later from gas infall. Finally, we measure the integrated very red (U-B>=0.25) bulge light at z~0.8 to be ~7×107 Lsolar Mpc-3. This amount is roughly one-third of the rest-frame B luminosity for all GSS galaxies at that redshift. The uncertainties in both local and our distant bulge luminosity densities remain too large to settle the issue of whether a large fraction of bulges were formed or assembled after a redshift z~1. Blue (U-B<0) bulge candidates are present, but only as a minor (8%) population. In general, such candidates have luminosities and surface brightnesses lower than that of the very red bulges; have large disk fractions by luminosity; and have emission line widths typically less than 100 km s-1. These properties are all inconsistent with those predicted for star-forming progenitors of the luminous bulges of today, i.e., the blue photobulges are not genuine blue ellipticals or bulges. Moreover, over 60% of the bulge candidates that are not very red appear to reside in galaxies with morphologies suggestive of interactions and mergers. Thus, our deeper, more extensive, and less disk-contaminated observations challenge prior claims by other groups that 30%-50% of field bulges or ellipticals are in a blue, star-forming phase at redshifts z<1. We conclude, with the caveat that luminous ellipticals and bulges at z~1 have r1/4 light profiles, that they, as do luminous early-type cluster galaxies at the same redshift, are already dominated by metal-rich, old stellar populations that have been fading from a formation epoch earlier than redshift z>1.5. Only small amounts of residual star formation are needed to explain both the absence of bluening of bulges to today and the presence of emission lines seen in the Keck spectra of the very red distant galaxies. Based on observations obtained at the W. M. Keck Observatory, which is operated jointly by the University of California and the California Institute of Technology and on observations made with the NASA/ESA Hubble Space Telescope (HST) obtained from the data Archive at the Space Telescope Science Institute (STScI), which is operated by the Association of Universities for Research in Astronomy, Inc., under NASA contract NAS5-26555. These observations are associated with proposals GTO 5090 and GTO 5109. 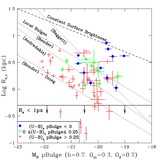