The DEEP Groth Strip Survey. VII. The Metallicity of Field Galaxies at 0.26 < z < 0.82 and the Evolution of the Luminosity-Metallicity Relation

Using spectroscopic data from the Deep Extragalactic Evolutionary Probe Groth Strip Survey (DGSS), we analyze the gas-phase oxygen abundances in the warm ionized medium for 64 emission-line field galaxies in the redshift range 0.26<z<0.82. These galaxies comprise a small subset selected from among 693 objects in the DGSS. They are chosen for chemical analysis by virtue of having the strongest emission lines. Oxygen abundances relative to hydrogen are in the range 8.4<12+log(O/H)<9.0 with typical internal plus systematic measurement uncertainties of 0.17 dex. The 64 DGSS galaxies collectively exhibit an increase in metallicity with B-band luminosity, i.e., an L-Z relation like that seen among local galaxies. Using the DGSS sample and local galaxy samples for comparison, we searched for a ``second parameter'' that might explain some of the dispersion seen in the L-Z relation. Parameters such as galaxy color, emission-line equivalent width, and effective radius were explored but found to be uncorrelated with residuals from the mean L-Z relation.

Subsets of DGSS galaxies binned by redshift also exhibit L-Z correlations with slopes and zero points that evolve smoothly with redshift. DGSS galaxies in the highest redshift bin (z=0.6-0.82) are brighter, on average, by ~1 mag at fixed metallicity than those in the lowest DGSS redshift bin (z=0.26-0.40) and by up to ~2.4 mag compared to local (z<0.1) emission-line field galaxies. Alternatively, DGSS galaxies in the highest redshift bin (z=0.6-0.82) are, on average, 40% (0.15 dex) more metal-poor at fixed luminosity than local (z<0.1) emission-line field galaxies. For 0.6<z<0.8 galaxies, the offset from the local L-Z relation is greatest for objects at the low-luminosity (MB>-19) end of the sample and is vanishingly small for objects at the high-luminosity end of the sample (MB~-22). We compare these data to simple single-zone, exponential-infall PÉGASE2 models, which follow the chemical and luminous evolution of galaxies from formation to z=0. A narrow range of model parameters can qualitatively produce the slope of the L-Z relation and the observed evolution of slope and zero point with redshift when at least two of the following are true: (1) low-mass galaxies have lower effective chemical yields than massive galaxies, (2) low-mass galaxies assemble on longer timescales than massive galaxies, and (3) low-mass galaxies begin the assembly process at a later epoch than massive galaxies. The single-zone models do a reasonable job of reproducing the observed evolution for the low-luminosity galaxies (MB~-19) in our sample but fail to predict the relative lack of evolution in the L-Z plane observed for the most luminous galaxies (MB~-22). More realistic multizone models will be required to explain the chemoluminous evolution of large galaxies. 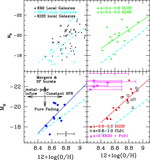