The Structure of Magnetocentrifugal Winds. I. Steady Mass Loading

We present the results of a series of time-dependent numerical simulations of cold, magnetocentrifugally launched winds from accretion disks. The goal of this study is to determine how the mass loading from the disk affects the structure and dynamics of the wind for a given distribution of magnetic fields. Our simulations span 4.5 dex of mass loading; in the context of a disk with a launching region from 0.1 to 1.0 AU around a 1 Msolar star and a field strength of about 20 G at the inner disk edge, this amounts to mass-loss rates of 1×10-9-3×10-5 Msolar yr-1 from each side of the disk. We find that, as expected intuitively, the degree of collimation of the wind increases with mass loading; however, even the ``lightest'' wind simulated is significantly collimated compared with the force-free magnetic configuration of the same magnetic flux distribution at the launching surface, which becomes radial at large distances. The implication is that for flows from young stellar objects, a radial field approximation is inappropriate. Surprisingly, the terminal velocity of the wind and the magnetic lever arm are still well described by the analytical solutions for a radial field geometry. We also find that the isodensity contours and the Alfvén surface are approximately self-similar in mass loading. The wind becomes unsteady above some critical mass-loading rate. The exact value of the critical rate depends on the (small) velocity with which we inject the material into the wind. For a small enough injection speed, we are able to obtain the first examples of a class of heavily loaded magnetocentrifugal winds with magnetic fields completely dominated by the toroidal component all the way to the launching surface. The stability of such toroidally dominated winds in three dimensions will be the subject of a future investigation. 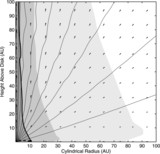